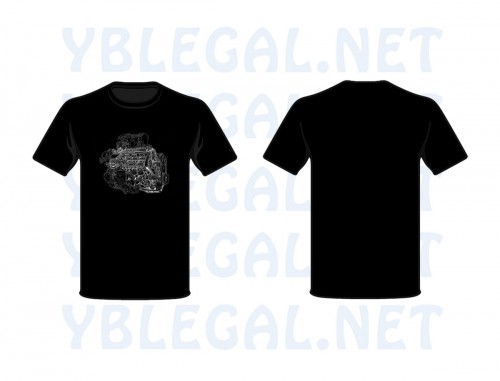 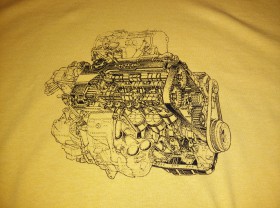 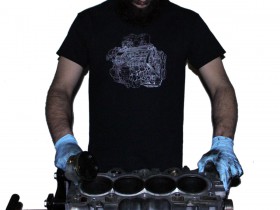 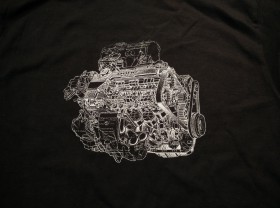 We also make custom color combinations, and custom additions such as your name, vehicle, or engine setup, just contact us.

Our t-shirts are heavy-weight cotton. We use water-based discharge inks, leaving soft, flexible, vibrant colors for years to come. No matter what fabric color you choose, your ink color will not be affected.

This t-shirt is single sided, featuring a large image on the center chest.

The B-series are a family of inline four-cylinder DOHC automotive engines introduced by Honda in 1989. Sold concurrently with the D-series which were primarily SOHC engines designed for more economical applications, the B-series were aimed more as a performance option featuring dual-overhead cams along with the first application of Honda’s VTEC system (available in some models). To identify a Honda B-series engine, the letter B is normally followed by two numbers to designate the displacement of the engine, another letter, and in US-spec engines, another number. The Japanese spec-engines are normally designated with a four character alphanumeric designation.[1] The B-series, the B20B variant in particular, is not to be confused with the earlier Honda B20A engine introduced in 1985 and primarily available in the Prelude and Accord-derived vehicles from 1985-1991. While sharing some design elements and both being multivalve Honda four-cylinders, the B-series and B20A differ substantially in architecture, enough to be considered distinct engine families.

They were made in 1.6-, 1.7-, 1.8-, and 2.0-liter variants, with and without VTEC (Variable Valve Timing and Lift Electronic Control). Later models have minor upgrades including modifications to the intake valves and ports and piston tops, along with individual cylinder oil injectors (B18C models). They produce between 130 hp (97 kW) and 200 hp (149 kW), with some models capable of a redline over 8,500 rpm.

The Honda B16 has appeared in six different forms over the years.

You may specify custom color choices by leaving a note during checkout. If you don’t see a combo or color you want, please feel free to contact us! Want to add your name or something else? Contact us!

Custom is what we do.  Color matching for image color is available.

Color/size supply fluctuates, so this item may take longer to process. If time is of the essence, please contact us before placing an order; if the wait is longer than normal, we will notify you. Normal ship time is 1-7 days

There are no reviews yet.